The Tip Characterization module is used to estimate the shape of the used SPM tip and for de-convoluting recorded images to compensate for tip shape artifacts. Furthermore, scan emulation is provided as an instructive tool to observe the effect of scanning with a known tip.

The tip is the most critical part of scanning probe instruments, and knowledge about its form is essential for any evaluation of a surface image.

The Tip Characterization Module will estimate the shape of a used tip using a “Blind Tip Reconstruction” method. Therefore, no precise knowledge of the surface is required – except that is has to have spikes and slopes steeper than the tip used. 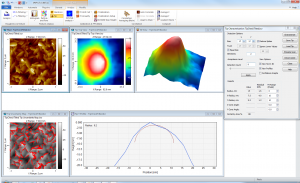 The full geometry of the tip is calculated with a few mouse clicks. The tip radius and cone angle are extracted automatically based on specified fitting ranges.

When combined with the 3D Visualization Studio module, the calculated tip can be shown in 3D view in 1:1 aspect ratio to give a correct impression of the tip.

The estimated tip can be saved and used for de-convoluting other images recorded with the same tip or stylus in order to compensate for its shape and get closer to the true surface topography.

With a free plug-in artificial “tips” can be created and used for de-convolution, but more important also for emulating the scan with a blunt tip. This is particularly useful for educational purposes.