Image Metrology's founder, Dr. Jan F. Jørgensen recently gave an interview discussing the field of Scanning Probe Microscopy, which below is re-produced for the knowledge of SPIP™ users. 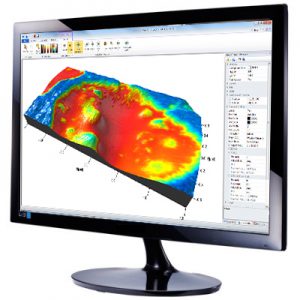 Scanning Probe Microscopy or SPM, is a technique that uses a very sharp probe to scan over a surface in a raster pattern. When the probe is within atomic distance of the surface an AFM (Atomic Force Microscopy) probe can sense the repulsive and attractive forces from the surface. The height of the probe is controlled such that the force is kept constant meaning that also the distance to the surface is kept constant. Therefore, a topographic landscape image can be produced by recording the z position of the probe for the x, y positions.

Effectively the AFM probe traces over the surface of a substrate and records the surface topography as it does so.

STM (Scanning Tunneling Microscopy) works in a similar manner to AFM but uses a different sensing method. In STM there is a bias voltage set between the probe and the surface and when in atomic distance to the surface a tunneling current can be measured by the probe.

Because both of the techniques involve scanning very close to the surface it is possible to obtain images with atomic resolution. 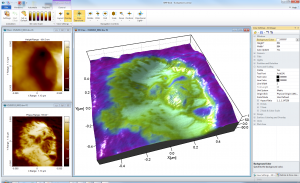 The big advantage of SPM techniques compared to optical techniques is the ability to obtain height information and the unique capability of obtaining images at atomic resolution. SPM allows a lot of geometrical information to be extracted at a very detailed level.

To obtain geometrically correct images it is crucial that the movement of the probe relative to the surface can be controlled better than the desired resolution, which is a big challenge. It is almost impossible to create images where the pixels are acquired equidistantly and where there is no coupling between the axes. Even in the most perfect instrument problems with environmental noise, vibration and temperature changes will lead to imperfect images.

In SPIP™ we have implemented several methods to characterize imperfections and correct for them which allows extremely accurate measurements to be performed.